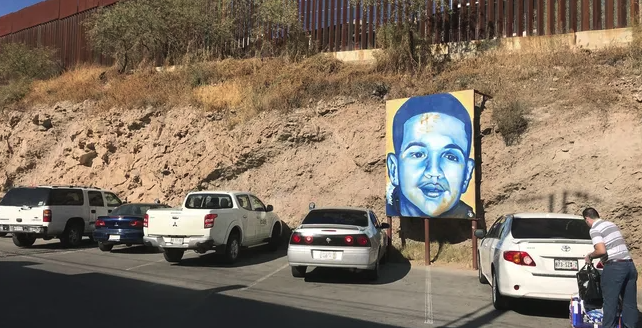 After Supreme Court rules against them, families in cross-border shootings turn to international watchdog

In this Dec. 4th 2017, file photo, a portrait of 16-year-old Mexican youth Jose Elena Rodriguez, who was shot and killed in Nogales, Sonora, Mexico, is displayed on the Nogales street where he was killed that runs parallel with the U.S. border. A U.S. Border patrol agent who was acquitted of the second-degree murder in a case that ended in mistrial will be retired on lesser charges, the attorney for the family of the rock-throwing teen killed in a 2012 cross-border shooting said Friday, May 11, 2018.

TUCSON — Six families in Mexico filed a petition before an international human rights watchdog group seeking to hold the United States government accountable for the deaths of their loved ones at the hands of U.S. Border Patrol agents at the U.S.-Mexico border.

The petition, filed last week before the Inter-American Commission on Human Rights, sets in motion an attempt by the families to continue their pursuits for justice outside of the U.S. legal system.

In February, a Supreme Court ruling closed off the possibility for families in cross-border shooting cases to seek remedies within the U.S. court system. The decision limited or ended pending lawsuits in the six cases.

“The American people could not have foreseen in 2000 that in 2020 it would require an international legal proceeding to remind the United States that it cannot lawfully kill civilians absent imminent peril and that it must open its courts to families who want judicial review of those killings,” the 186-page document reads.

“In granting this Petition, the Commission can help start the United States on its long and difficult path to rejoin the community of nations,” it added.

As its name suggests, the Washington-based commission is tasked with investigating complaints of human rights violations in member countries, which includes the United States. The petition argues that the U.S. government has violated the human rights of the six people killed by border agents and of their families by denying them the ability to seek remedies in court.

The commission has yet to decide whether to take up the petition. If it does, it would open an investigation and issue recommendations in the case. The international body has argued their findings are legally binding, but has few enforcement options, and the U.S. government has not always supported that stance.

The petitioners are the families of six Mexican men and teenagers killed in cross-border shootings along various parts of the U.S.-Mexico border over the past decade.

Two are Arizona cases: the 2010 shooting death of Jorge Alfredo Solis Palma, 28, near Douglas, and the 2012 high-profile killing of Jose Antonio Elena Rodriguez, 16, in Nogales. Saturday marks the eight year anniversary of his death.

The family of Sergio Adrián Hernández Güereca, 15, who was killed by Agent Jesus Mesa Jr., also signed to the petition. His death in June 2010 in El Paso resulted in the legal case that wound up before the Supreme Court twice. In February, the justices upheld in a 5-4 decision a lower court’s ruling denying his family standing to sue in the U.S.

“If the U.S. judicial system is so callous and broken that it disregards the lives of these innocent victims and flatly denies any reparations or remedies, then we will stand with these families and take their fight to a Court that recognizes and promotes the value of human life,” said Nick Shadowen, the attorney representing the six families who filed the petition.

More specifically, the petition argues that Border Patrol’s policy surrounding the use of force in response to rock-throwing incidents at the border is unlawful and in violation of the American Declaration on the Rights and Duties of Man. The declaration paved the way for the establishment of the commission as a mechanism to enforce it.

According to the filing, the Border Patrol’s policy allowing for lethal force in response to rock-throwing incidents at the border do not meet the “imminent-peril” standard, meaning the agents lives were not at risk, and can therefore be considered “extrajudicial killings,” the document argued.

“And since the policy did not require adherence to the Imminent-Peril standard, the United States did not provide the agents with the training or equipment to facilitate compliance with it,” the petition said.

U.S. Customs and Border Protection, Border Patrol’s parent agency, did not respond to The Arizona Republic’s request for comment.

In 2014, Border Patrol adopted recommendations from an agency panel and announced changes to its use of force policy, restricting when agents could shoot and urging agents to avoid putting themselves in situations where there was no alternative to using lethal force.

But in 2018, President Donald Trump made headlines and drew criticism when he signaled his willingness to authorize lethal force in response to border rock-throwing incidents.

“Anybody throwing stones, rocks, like they did to Mexico … we will consider that a firearm,” he said, responding to questions about the the deployment of troops to the border that year in anticipation of the arrival of a large caravan of Central American migrants in late 2018.

Trump later added: “I told them, consider it a rifle.” He walked back those comments the next day, saying rock-throwers would be arrested, not shot. The petition cites his comments.

The document argues that the Supreme Court decision to deny legal recourse to Mexican families in cross-border shooting cases by claiming the country has sovereign immunity is “patently, defiantly unlawful,” according to the petition.

It also said the rulings are discriminatory. In four of the six shootings, the victims were in Mexico; one was partially in the U.S. and the sixth was within the U.S. territory. The court ruled that the families in Mexico did not have standing to sue in the United States.

“Those killed outside U.S. territory are more likely to be non-U.S. citizens, and withholding a judicial remedy based on their location has a clear disparate impact on that category of persons. In fact, every known victim in a Border Patrol cross-border killing has not been a U.S. citizen. A remedy for violation of a fundamental right such as the right to life cannot lawfully depend on that classification,” petitioners argued.

On that point, the petition seeks policy reform to prevent those issues from happening again, as well as a public apology from the U.S. government.

One of the women listed as a petitioner is Araceli Rodriguez, the mother of 16-year-old Jose Antonio Elena Rodriguez.

Her son died on Oct. 10, 2012, when Agent Lonnie Swartz fired 16 shots across the border fence from Nogales, Arizona to Nogales, Sonora, striking and killing the Mexican teenager 10 times in less than a minute.

She learned more about the incident in excruciating detail over the course of two criminal trials, months apart, in Tucson federal court in 2018.

Swartz faced second-degree murder, voluntary and involuntary slaughter charges, the first border agent criminally prosecuted in court. The juries in both trials acquitted him of all three charges.

The mother agreed to sign on to the petition after discussing it with Taide Elena, Jose Antonio’s grandmother, she told The Republic. However, her main preoccupation at the moment was preparing for Saturday’s vigil marking the eighth anniversary of her son’s death.

Reached by phone Thursday, she said she had just finished replacing an iron cross from the site along Calle Internacional in Nogales, Sonora where her son’s body hit the ground after Swartz shot him.

“Yes, it was stolen,” she said. “This is now the third time that they remove it, steal it or throw it away. So we looked for it, they just do it out of malice.”

Every year since he died in 2012, Rodriguez, family members and supporters gather at the site of Jose Antonio’s killing. She is expecting this year’s vigil to be smaller, given the COVID-19 situation.

“It’s not something big, we’re not doing marches,” she said in Spanish. “But yes, like in every year, I will go and mark my son’s murder there.”

The vigil will provide an opportunity for her to talk to Elena and other family members about the petition filed before the Commission, she added.

In addition to Rodriguez, the other petitioners in the case are: